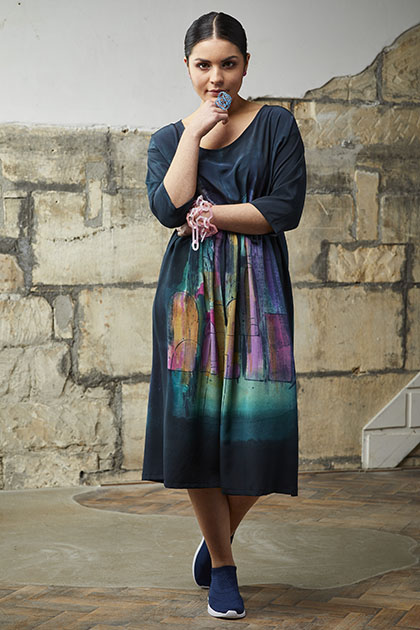 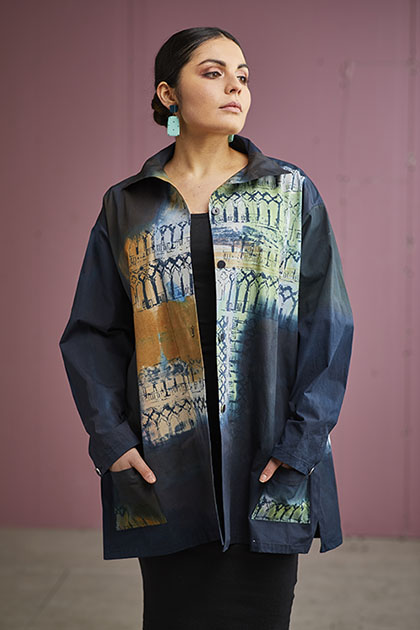 The sensory feast of the city of Venice has inspired Carole Waller’s latest collection of hand painted clothing which, like the Venice itself, is full of colour, bold reflections and fluidity of movement.

“Visiting Venice once again last spring I was completely captivated and transported back to magical childhood visits, “ Carole explained. “I have taken images of archways stretching over the canals, reflections of boats and the beautiful grilles at the windows of the Peggy Guggenheim Collection. These repeating patterns create screens through which colour seeps through – the shadowy greys, silvers and sludgy greens of the canals and the bright reds and blues reflected on the water and pale whites and greys and soft pastels of the lagoon as the sun sets”. This colour palate forms the basis of the collection with surprising splashes of bright red in a nod to “Don’t Look Now”. “The colourful red awnings along the canals serve as a counterpoint to the subdued and sludgy colours of the canals and bright reflections of the buildings which change minute by minute as the light shifts” says Carole.

Carole pays homage to her mother who, as a young artist alone in Italy, was equally enchanted by Venice which she painted in a series of watercolours “beautifully capturing the buildings with her sensibility to colour and atmosphere”. Another element that appears throughout the collection is taken from an iconic print from a drawing of the Ca D’Oro Palace on the Grand Canal. Carole went to seek out the block printers of which only a handful remain. “ I have dedicated my collection to them and their beautiful, simple renditions of the decorative and spiritual uplifting buildings of Venice.

Making an investment in a piece by Carole Waller ensures that you will always be the centre of attention. They are indeed unique, whether you are drawn to a tie wasted shirt or a neat dress or a flowing scarf that in itself will be a talking point. And for special occasions, Carole is always happy to create a one-off, bespoke outfit; please contact Carole Waller for a one-to-one appointment: 07803033629. 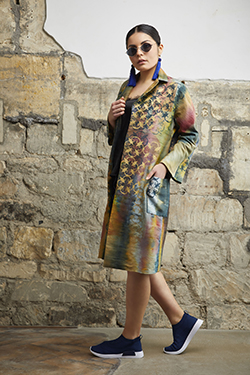 For the last two weeks I have had the pleasure of interning with Carole Waller.

It has been very hectic at times, and I have experienced things that no multi-million company could have offered me.

I am Faye Patterson – and I am currently studying my final year for a foundation degree in Fashion and Textiles at Bath Spa University, and I will be applying to a Textiles BA for my 3rd year of design. As my course is a mixed degree we’re constantly moving on to a new area of study, so I have not had as much opportunity to work with textiles. I would still like to pursue a career in it as I find it more exciting than the fashion elements of my course, which is why an internship with a textile designer has been incredibly helpful. Like Carole, I am an artist at heart and so her work on fabrics fascinated me.

During the first week I was taught new, invaluable skills. These included work with steam-set dyes, and learning how an abundance of materials can have dye transferred onto them (including Carole’s own beautifully coloured buttons). Being such a newcomer to textiles still, I didn’t realise how much work was needed to produce just a few metres of fabric. As an example, I was taught how to use a technique called Devoré, where mixed fibre fabric is treated so that a design is eaten away to reveal semi-transparent areas. There are several stages to completing this, making it both expensive and labour intensive. I also tried a few new finishing processes such as fringing, a simple skill but one that is useful to learn.

Carole had just received a new set of coats (part of her Winter Collection that was due to be finished that week) as she was working with a women’s association in Gujarat who use the traditional technique of Kantha stitch to quilt fabrics. She wanted to try their work out with a completely different coat shape  – so I was tasked with copying a master pattern in order to send them the new design for manufacture. I also altered one of her shirt patterns to make it more suitable for winter. Internships rarely involve pattern cutting as it can be a difficult task so this was an amazing opportunity.

A photoshoot for her Winter collection at  the new hotel, No.15  Great Pulteney, involved working with professionals from various backgrounds, and liaising with hotel staff to ensure we got as much photographed as possible in the little time we had. This also gave us the chance to discuss which photographs would be selected for her press release.

The most mundane of tasks are vital to the success of Carole’s collection:  I leafletted, washed tables, ironed metres of silk, I ran errands, I worked on pricing new products, designing wrapping paper, and I mopped the floor. Working with someone who runs their own business allowed me to see the completion of the big picture.

Working at her shop, One Two Five Gallery, gave me the chance to discuss garments individually with customers and understand why certain shapes or colours worked well on certain people. It is hard to envision how a garment will look without first considering who the customer is, something that I struggled with as a designer. Carole’s clothes come to life on people because she has developed an affinity to do this, so watching her work on commissioned and stock pieces has been incredibly useful.

Working as any sort of designer incredibly hectic, especially since Carole had so many deadlines whilst I was interning. Just two weeks of working with her has given me skills that will be useful for a lifetime, and I now have a newfound appreciation for textiles

An exciting recent development in my work resulted from a meeting with a company in Bradford-On-Avon called Heaven Scent, who make a wide range of ethically sourced products including soaps, candles, reed diffusers and body products. Heaven Scent are the first company to create a natural alternative to a paraffin wax candle, over 24 years ago. They developed a unique blend of plant wax that burns cleanly and effectively, infused with fine fragrances and essential oils.
I discovered through talking with them that in addition to making a range of their own candles in glass containers, that they could fill containers made by other companies. I took them a range of different sizes and shapes of my pots, chose some scents and had these samples poured. The results were very good, the aromas beautiful; they smell amazing even when they are not lit! So now I am working with Heaven Scent building up a range of candle pots to sell in our gallery. When the candle has burned away you can clean out the residual wax and use the vessel in your home – cups, bowls and more besides. I am planning to do individual candles and also boxed sets for gifts, especially around Christmas.

Carole is also collaborating with them on a range of organic soaps wrapped around with her painted canvas and glass candles in a sleeve of painted silk all with Christmas in mind even though it is still July – but the samples are filtering onto the gallery now alongside a lovely collection of bags and pencil cases painted on canvas and combined with real leather. Carole is working with  Charlotty also nearby, in Trowbridge to design and make these with her fine sense of colour and craftsmanship. Find the first of the bags on her website here.

We have titled this new range of ours: Waller and Wood. 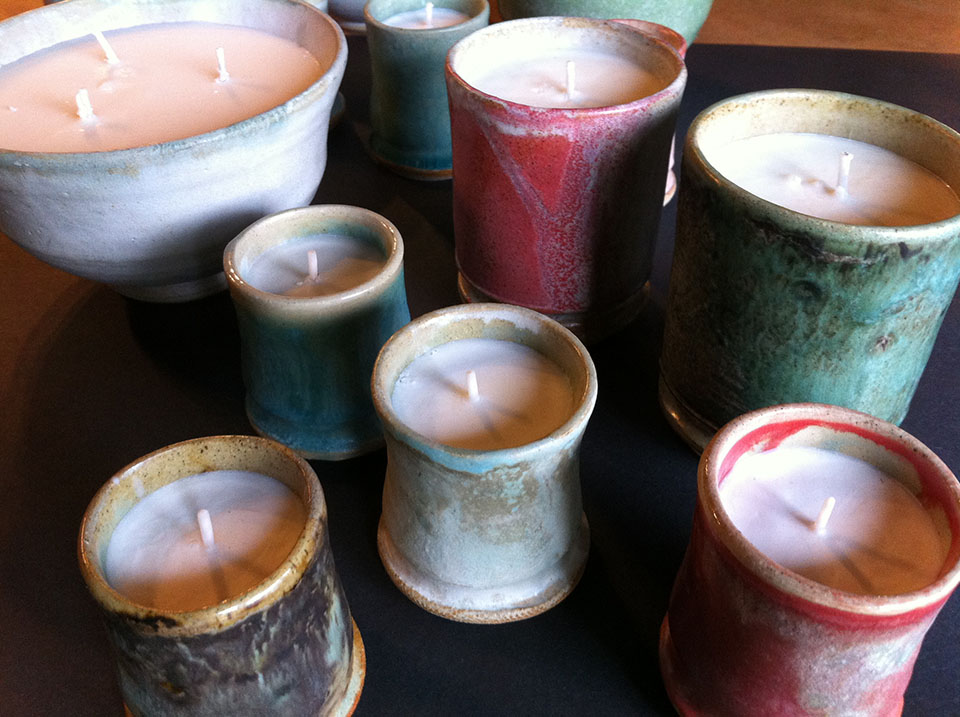 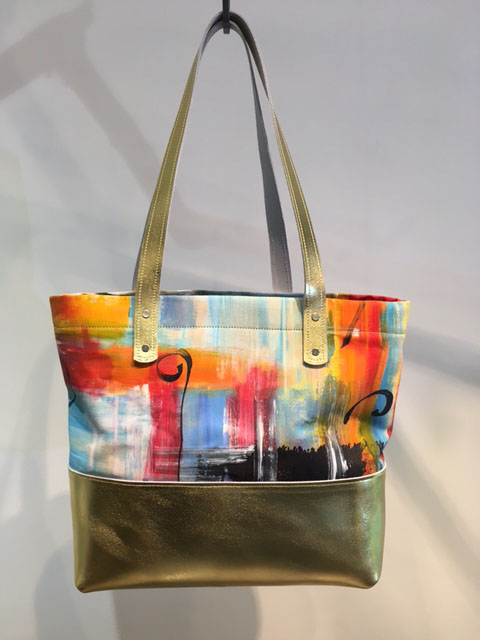 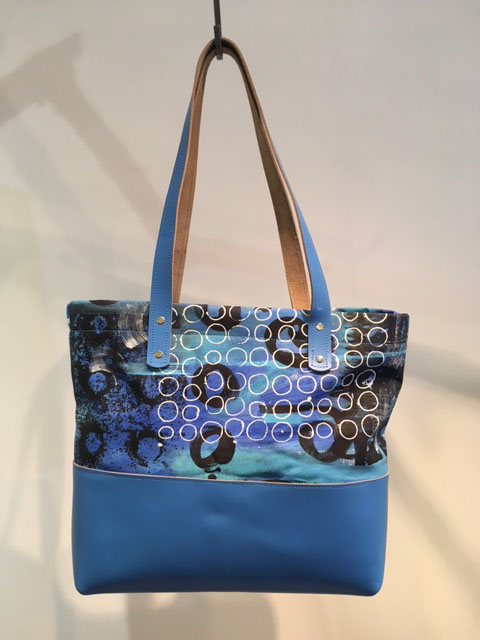