Gary Wood, a potter who is based in Bath, in south-west England, used to feel that in an ideal, probably unattainable, world he would aim to achieve the immediacy of °getting it right first time” and had a somewhat resent-ful attitude towards the refiring of a piece. However, much of what has gone into his kiln over the past two years is of a more “graphic” nature which has meant that its making entails not only working, but also reworking; and this has taught him that the effects for which he is striving cannot – necessarily be achieved at one go. Perhaps even more importantly, he has learned that a process such as re-firing can actually prove to be both enticing and rewarding.

Big, weighty stoneware bowls, often in monochromatic white, with unruly, almost dangerous surfaces – which can suggest a microcosm of eruptive landscape, or awake images as disparate as the solidified foam of waves or cracked mud in some parched terrain – are the forms which Wood has been exploring for some years. However, during this time he has not neglected other modes of ceramic expression, including his long-time involvement with the tea-bowl. In these unomi, as in other of Wood’s work, the juxtaposing and commingling of colours – chalky whites and grey outside with an interior where a pale persimmon is cut with a soft shade of salmon in one particularly successful example, and some dreamy, gentle greens – which manifest the quietist and contemplative element in Wood’s oeuvre, and, along with the characteristic subtlety of the glazes, imbues these vessels with a tranquil but striking individuality of stature.

Several of these tea-bowls he decorated with small indentations made with a simple wooden stamp; these little marks were often used with a restrained sparsity, but when appearing in greater numbers they can suggest fragments of pixelation, or perhaps some indecipherable, stylus-inscribed script A representative of this latter group has a milky blue-grey ground which is in contrast with the specks of gold which have gathered in the tiny cavities. On others, the decoration takes the form of small, raised relief areas, a dimensional reverse of the impressed indentations, but clearly related to them. While there is a certain ordered quality to both these forms of ornament, there is no sense of mathematical precision; it is rather as if one sees Wood enjoying/relishing the directness of applying a design to the surface area of his artefact by an extremely basic means – a simple homemade instrument.

Currently the most prominent strand in Wood’s work is the stoneware wall panels whose ‘graphic’ elements are inspired by his recent travels – time spent in Morocco and visits to New York and Italy – as well as by his reading of Buddhist texts. It may be the sudden visual “hit” of the colour of a New York taxi cab which made him realise that “I must get more yellow into my work” (“Towards Yellow”), or the lights in the night-time windows of a nearby hotel which were the provenance of the series entitled ‘New York Windows”.

It was the image of a monk spinning a prayer wheel whilst walking around the walls of Sakya Monastery in Tibet that inspired ‘Mantra 1’ and “Mantra 2 whose horizontal bands of colour emphasise the essentially linear nature of this pair of plaques.

“Something happens and it becomes something else”: the very imprecision of these words conveys how Wood sees the not always easily identifiable ways in which responses, insights, images find expression in, or are transmogrified into art. An instance of “something happening” was Wood’s response to a photograph of an entrance to a New York metro station; this was a powerful reaction which eventually led to the making of “Chambers Street Station”. Wood has apotheosised this doorway, so that the access to a locale for the provision of public transport, now carries connotations of being the threshold to an ancient place of burial, or even perhaps to another world whose raison d’être is more to do with those many myths in which characters descend to the nether regions for knowledge or punishment, than with subway travel.

The presence of the ‘frame’ in several of these works strikes the viewer almost immediately – the doorways mentioned above seem to be set within almost monolithic surrounds, although the panels themselves are comparatively compact in size, while other pieces contain clearly demarcated borders in addition to the frame supplied by the edges of the work. This focuses attention on what is contained inside these boundaries and creates a sense of order and arrangement of the visual mileu, which says something very different from the expressionistic energy of the large, raggy bowls which were mentioned earlier.

Perhaps one of the most striking achievements of this new body of work is the intensity of the relationship between colour and surface texture. ‘Raja” (24 an x 24 cm) is one of the most striking of these wall pieces and here the textural interest resides in the all over vertical ribbing of the surface whose shades of beige and biscuit provide a neutral background for a strong and boldly applied motif, whose rich blue-green is made more complicated by the shades of turquoise which have gathered in the valleys of this corrugated surface. It is the dense, uncompromising matt blue in “Blue Spine”, ‘Blue Wave and ‘Blue Channel which underlines the impact of the rhythmical, irregular ribbing and how differently the light falls on various parts of this dimensional surface.

Certain of these panels have very little in the way of added embellishment, so that the concentric circles appearing on “Aim” have the clarity and directness of a minimalist target, while others have a considerably more animated feeling to their surfaces. This is particularly true of the “Windows” group. where blocks of colour demarcate the myriad of tiny depressions into waffle-like grids covering the entire “canvas”. The visual impact made by these circles and trellises, these linear frames within frames, is of a geometric nature, which is an extension of the effect created by the little raised or impressed square first met with on the tea-bowl.

It is always intriguing to witness a maker’s work when it is exploring new areas; there can be shock and surprise when the direction seems wholly new, there can be the pleasure of recognition in seeing the growth and development of themes and processes which have clearly fascinated the craftsperson over a period of time. In Gary Wood’s current ceramics the involvement with glazes is still manifest, but the nature of the wall plaques is wholly different from the immensely tactile yet wild surfaces of some of the shapes which have preceded them. However, these wall panels are not without references to earlier of Wood’s pieces; he often wrapped work, at the leather hard stage, with netting which imparted a mesh imprint to the clay, and the raised and indented decoration interpret this grid effect more boldly. But what remains unchanged is the goal which Wood set for his ceramics many years ago and which he expressed in the following words – “to give presence to form”. These new works – with their more “modem” feeling – are a fresh approach to that same difficult end. 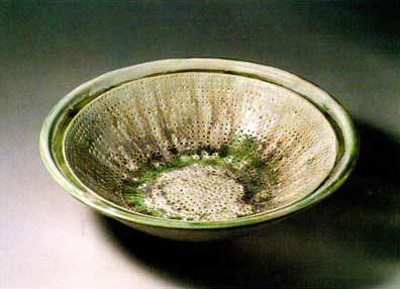 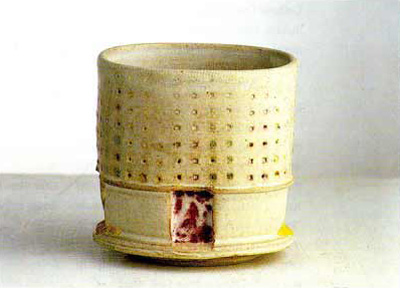 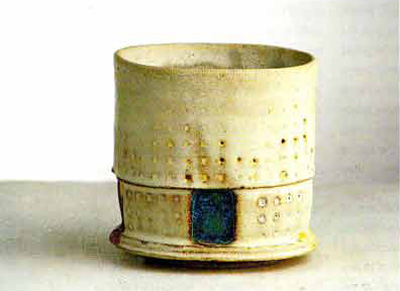 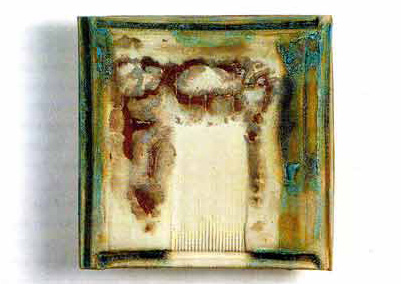 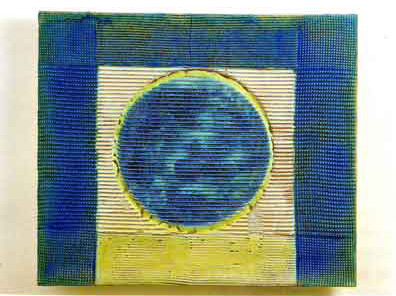 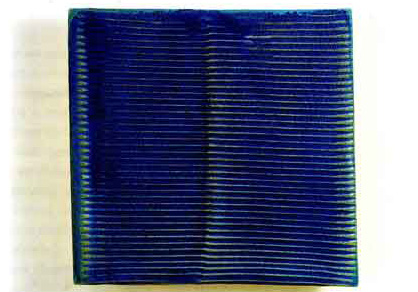 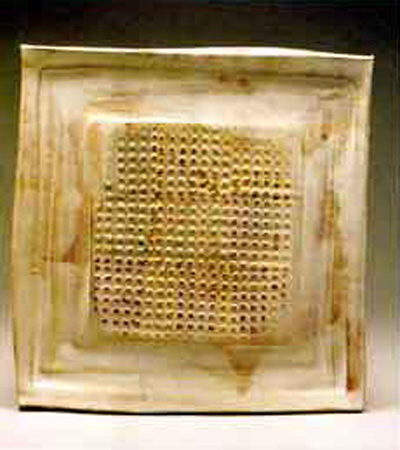 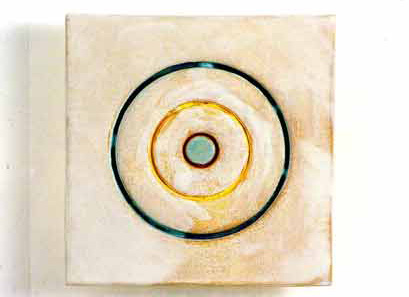 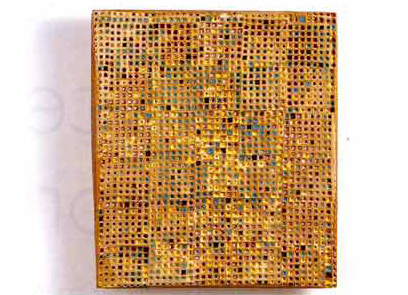 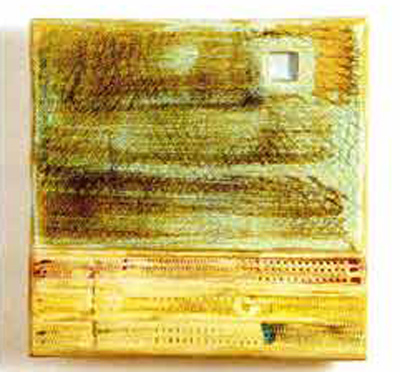